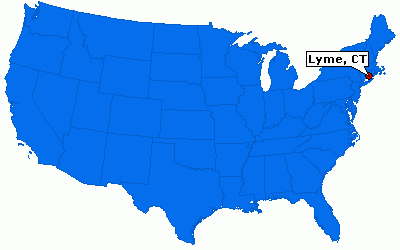 I bring this up because we heard last year that the disease had crept into southern Ohio. We were prompted by a drug rep, of all people, to start testing for the disease as part of our wellness program. Of course she represented the company that produced a new Lyme vaccine, so I was skeptical. But, lo and behold over the last 5 months we’ve had a 10% positive rate. 10 PERCENT!

That's 1 in every 10 dogs. I was stupefied. So the time had come to include Lyme vaccine in our core program for dogs.

What is Lyme Disease? 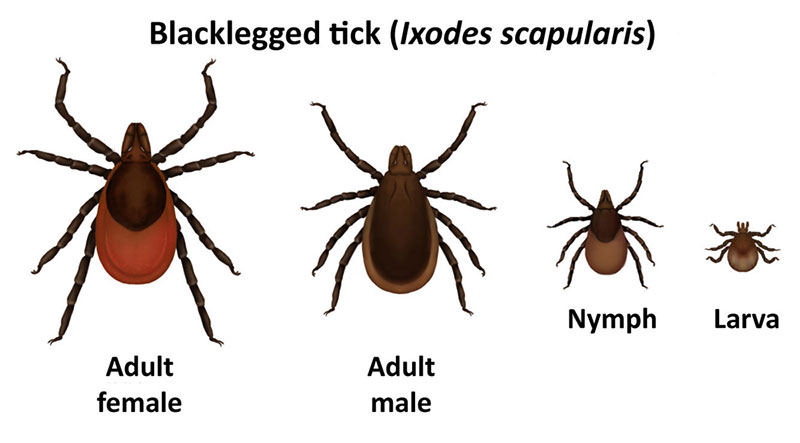 Lyme disease is a disease caused by the bacterial spirochete Borrelia burgdorferi (there will be a test at the end of this blog). This bacteria is carried by the Deer Tick, or also named the Black Legged Tick. It is a very small tick, so I guess we have to accept that it is indeed blacklegged.

The Deer Tick has not been found in this area until last year. Thus,no cases were seen. Infected dogs have variable symptoms ranging from non-clinical (little or no illness or symptoms) to extremely ill. Sick dogs commonly have a fever, are depressed, and tend to have shifting leg lameness. This is because the bacteria invades the joints eroding the cartilage. In more advanced cases kidney damage can develop. This damage is not done by the bacteria itself, but is related to the immune system. What are called immunoglobulins, large masses of protein fighting the bacteria that can damage the glomeruli of the kidneys. In other words, the small tubules in the kidneys clog up causing potential permanent damage. If the infection is fatal, this is usually the reason. The bacteria can also damage the heart and invade the nervous system.

How is it transmitted? 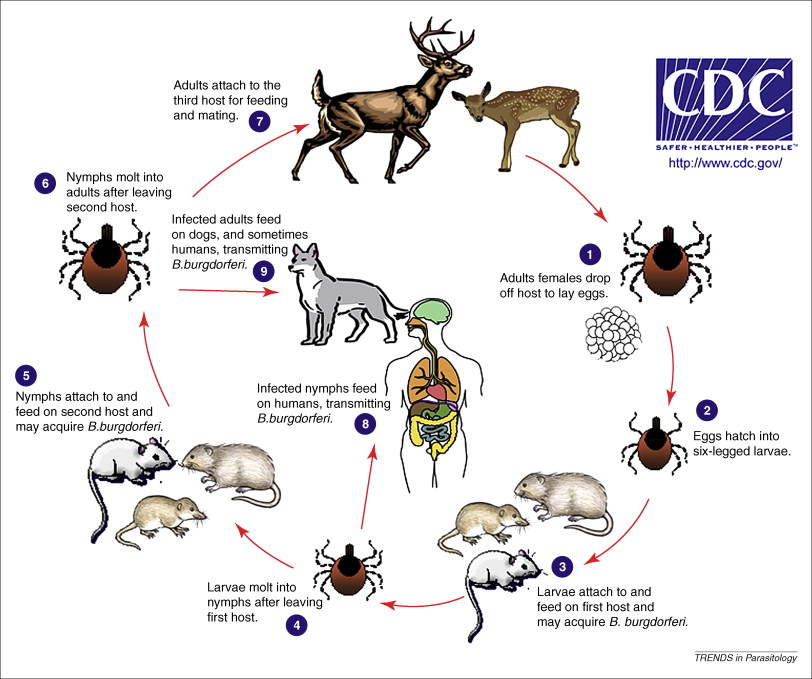 As mentioned, it is carried by the Deer Tick. When the tick bites, the bacteria passes into the dog (or person). In the spring and early summer the nymphs or baby ticks are the culprit. Obviously these are very small and rarely seen. Mid-summer into late autumn/ early winter, the nymph develops into the adult which also transmits the bacteria. Before attachment the adult is about the size of a pin head, and once fed and engorged a little larger than a pencil lead tip. You may find these with thorough exam, but again they are very difficult to see with the naked eye.

How do I know if my dog has the disease?

We now routinely include testing along with their heartworm test at their wellness appointments. If negative, we move onto prevention. If positive, we move onto kidney function testing. Any dog showing any sign of kidney disease is immediately started on treatment.

Is there a treatment?

Yes, but not a simple yes. If your dog is symptomatic or shows any damage to the kidneys, they are started on treatment immediately. Drugs in the Doxycycline family are used with great success. Later, further Lyme tests are done to verify treatment success. The bacteria is rarely eliminated and various treatment regimes are used to keep the bacteria in check. This may vary from no more treatments, to treating if symptoms recur, to occasional pulse dosing regardless of presence of symptoms. Each case is handled individually.

What if my dog tests positive on annual exams, but has never been sick and has normal kidney function?

This gets really confusing. Many experts say do not treat and monitor with occasional testing.

Others say treat every positive, and others say decisions to treat are on an individual basis.

We have decided to treat all positives. Why? Because the doctor who treated the first cases in Lyme County and now sees more infected dogs than any other practice, (and is considered the world's expert on the disease) does. Simple as that!

What can I do to protect my dog?

PREVENTION! Use excellent tick protection and I don’t mean what WalMart or Tractor Supply recommends. Come in and talk to us. We carry excellent functioning tick preventatives. If what we have doesn’t suit you, we’ll make sound recommendations on other products from our online pharmacy. Use your prevention ALL YEAR! 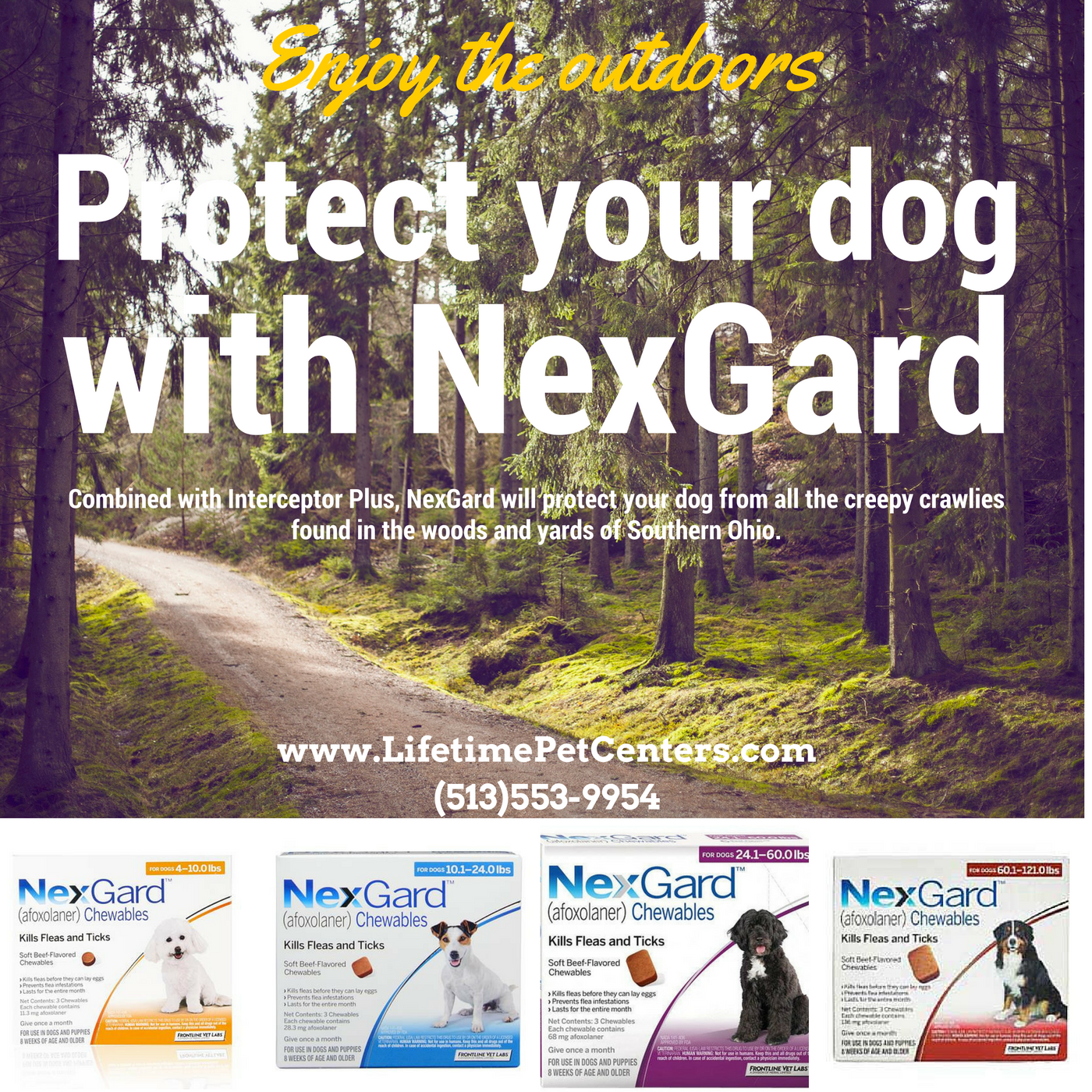 VACCINATE! As stated, we now include Lyme vaccine in our core program. Two reasons: the new vaccine is much more effective than the old one and the prevalence of the disease in our area is terrifying. This year you’ll have the inconvenience of returning for a booster (you don’t need to see me for the second visit). But from then on, it’s an annual booster included with the regular annual vaccine.  Only 1 poke, Making your dog much happier.

Anything else I need to know?

You betcha!  We can get the disease. If a Deer Tick bites and infects you or a family member with a large red target appearing at the site contact your physician immediately. Some of our human colleagues are a little slow at recognizing zoonotic disease (animal to human transmission), so if you have a question: ask point blank, could this be Lyme because the dogs in this are becoming infected?  Just sayin'. (Not to mention several weeks ago a human doctor was featured on a local radio show, only to say that dogs CANNOT get Lyme disease! That is totally incorrect.)

No vaccine exists for humans and we have no tick collars or monthly applications to apply between our shoulders. So, stay out of areas known to have ticks or a large population of deer. Wooded areas and long grassed meadows have the potential to be tick infested. Also, check your kids every day at bath time and include a thorough check of the scalp.

The name of the disease is

If you answered a,b,c,e,or f  go back and read the article again.