Don't let your cat be a hipster.

Type 2 diabetes is not an autoimmune disease. However, the symptoms are almost identical to type 1 with the one exception being time of onset and progression of symptoms. Early symptoms are excessive thirst and urination. As blood sugars rise they reach a renal (kidney) threshold and start to spill into the urine. The glucose transferring into the urine brings water with it creating a dehydrated state that leads to excessive thirst which leads to more urine production. The excess glucose in the blood also leads to increased blood pressure causing slow degenerative changes to the kidneys, liver, and heart. Insulin is responsible for the transfer of glucose into the cells, and lack thereof leads to further degradation of organ tissue. Allowed to progress the disease leads to ketoacidosis (too acidic blood), coma, and death.

As stated, the symptoms and progression of type 2 diabetes are slower than type 1. This is because it is not an autoimmune disease.  Instead it is caused by an inadequate supply of insulin. To simplify the causes I like to categorize the insulin deficiency into two categories: 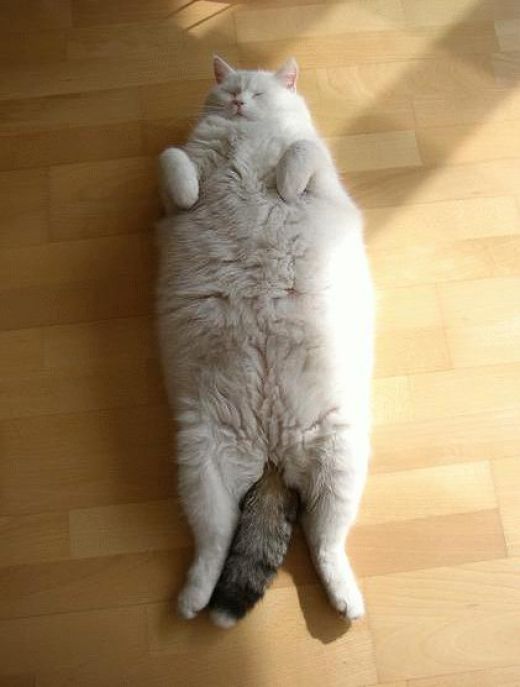 It may look cute but obesity is a major health concern for all pets AND people.

If allowed to progress the cat becomes dangerously ill necessitating hospitalization to stabilize and treat the diabetes. If caught in the early stages when the cat has a good appetite it can usually be handled as an outpatient. Most diabetic cats are insulin dependant requiring once or twice a day injections.  Monitoring is intense at the start until normal glucose levels are reached. Then, we usually see them monthly to check glucoses at peak insulin levels (4 to 6 hours post injection). On occasion they spend a day at the hospital to do glucose curves where we check the glucoses several times throughout the day. We also do occasional fructosamine levels. This tells us how well the cat has done over a several week period.

Cats are more difficult to maintain than dogs because they still produce some insulin on their own. This production varies from day to day, week to week, and month to month. Their injectable insulin needs change based on these fluctuations, making management much more of a challenge. Owners that can check their cat's blood glucose at home make this challenge much easier.

Some type 2 diabetics can be managed with oral medications, however; administration is difficult in cats and can be expensive. I usually recommend using injectable insulin because of ease of use.

Occasionally, I find a diabetic cat that can be managed with diet only.  These are usually obese cats that with weight loss fall into a weight range that their own insulin production suffices.  Also some marginally diabetic cats can be managed with diet. This involves feeding a prescription diet that is very high in protein. Cats are carnivores and their ancestors existed on multiple small high protein meals (mice). Research found that by returning to these eating habits some diabetics can be weaned off insulin shots. Common knowledge tells us that we’re probably not doing a good job feeding our cats. We feed them too many carbs and not enough protein.  I suspect this research led to the development of the Atkins diet in humans.

With proper care and monitoring our diabetics can lead long, happy lives. Yes, they are dependent on their owners but this creates a strong and long bond between you and your cat.

Finally, I want to say to cat owners, bring them in for their annual and semi annual checkups! This disease is common in older cats and if caught early with blood and urine testing many can be managed with weight loss and diet change and you can avoid that whole insulin shot thing.

Dr. Miller is a graduate of The Ohio State University Veterinary School of Medicine with over 35 years of experience in small animal medicine.