Recently, scientists finally discovered the virus Rhabdomyelositosis Varii in field mice and squirrels. Only two months ago they found this virus to be the cause of the new disease ravaging dogs on the east coast and migrating westward. The disease, named Azolamabide Canis is now known to be transmitted by rodent bites or via ingestion of the virus carrying animals. Infected dogs can also transmit the virus to other dogs by bite. Once contracted it invades the nervous system and progresses dramatically. Incubation for this virus is 4 hours to 2 days.

Progression of the disease then becomes slower, taking weeks to months. Symptoms are related to body systems shutting down. The nervous system remains somewhat functional making scientists believe that the virus somehow incorporates itself into the brain.

Scientists feel this virus is a cousin virus to Rhabdo. h. Varii that causes a similar disease in humans called Zombolis Humanis. Recently Z. Humanis outbreaks have been reported in the southeast United States and in Southern California.  The human form can only be destroyed by destruction of the brain. However, in the canine form the disease is self limiting.

At any time during disease progression, the symptoms will spontaneously reverse returning the dog to its normal form. Interestingly, most owners report that their pets are even more devoted and caring, making them the perfect pets. 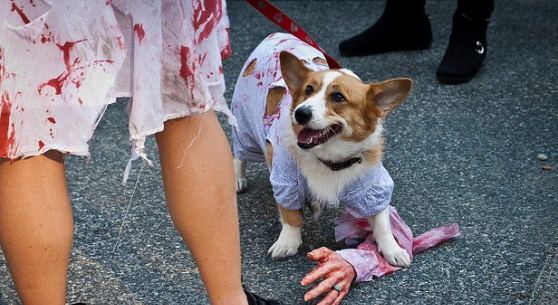